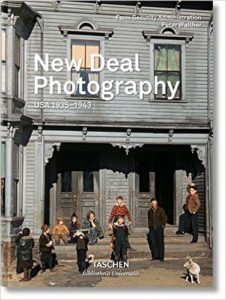 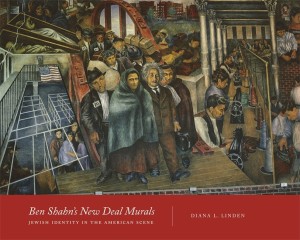 A prolific visual artist before, during, and after the New Deal, Ben Shahn’s religion (Judaism), place of birth (Lithuania), and first language (Yiddish), set him apart as a member of “the ‘Hebrew Race,’ a racial assignment both inferior and vastly different from white or Caucasian artists among whom Shahn is positioned today.” This identity, all-important at the time but largely overlooked now, accounted for a sense of history, community, and engagement with the world that Shahn manifested in his innovative and unflinching murals.

Ben Shahn’s New Deal Murals: Jewish Identity in the American Scene, a finalist in the Visual Arts category of the 2015 National Jewish Book Awards, examines four works that Shahn completed or envisioned while working for the WPA. Shahn learned fresco painting as an assistant to Diego Rivera in the 1930s and created his own visually powerful style as a muralist for the New Deal Arts Project.  After situating Shahn within early 20th Century New York, the book delves into the conception, creation, and reception of four murals:  “The Jersey Homesteads Mural,” which Shahn painted for a cooperative community of former Jewish garment workers established under the New Deal; the Bronx Central Post Office murals; a mural he proposed for the main St. Louis Post Office; and an easel painting in a Queens post office. Setting them within their national and international contexts, including Jewish agrarian communities in the Soviet Union, the rise of Nazi Germany, and life in Manhattan where Shahn lived and worked, Linden illustrates how the artist layered identities and eras to make America comprehensible to an “in between” people.

For instance, the Jersey Homesteads Mural celebrated American workers while alluding to the promise and disillusionment that the nation held for immigrants fleeing persecution. Linden maintains that it echoes the mass exodus of Eastern European Jews to America and the story of the Exodus from Egypt, calling attention to America’s stringent immigration policies at a time when Jews were fleeing Nazi persecution. In Shahn’s proposed St. Louis mural depicting Missouri’s history, prominent barbed wire suggests “an important tool by which white settlers kept ‘others’ out in order to claim the land for themselves,” as well as the Nazis’ use of “barbed wire as a tool to contain people,” Linden observes.

In Linden’s view, Shahn’s goal was to “spark positive social change.” Her book, bolstered by vibrant reproductions of Shahn’s murals, sketches, and photographs, shows that his view of art was to compel rather than simply commemorate.  Readers interested in Jewish American history, art history, and Depression-era American culture will enjoy this insightful book. 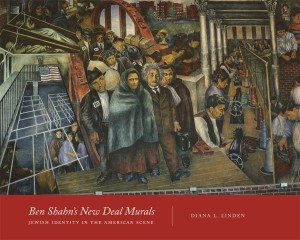 “Linden shows that throughout his public murals, Shahn literally painted Jews into the American scene with his subjects, themes, and compositions.”  SourceWayne State University, 2016

Ben Shahn’s celebrated New Deal murals can be found throughout the United States. Born in Lithuania, trained under Diego Rivera, Shahn’s work for the federal government depicted a diverse nation of workers, dedicated to the twin aims of progress and justice. (Appropriately, his mural for the recently-sold Bronx General Post Office, painted with his wife Bernarda, was inspired by Walt Whitman’s poem “I Hear America Singing.”) We are extremely happy to report that Ben Shahn’s New Deal Murals: Jewish Identity in the American Scene (Wayne State University Press, 2015), by art historian (and friend-of-the-Living New Deal) Diana L. Linden, has been named 2016 Finalist in the Visual Arts Category by the National Jewish Book Awards. In Ben Shahn’s New Deal Murals, Linden explores the ways in which the artist’s Eastern European Jewish background informed the conceptualization and production of his celebrated murals.

From the publisher: “In four chapters, Linden presents case studies of select Shahn murals that were created from 1933 to 1943 and are located in public buildings in New York, New Jersey, and Missouri. She studies Shahn’s famous untitled fresco for the Jersey Homesteads—a utopian socialist cooperative community populated with former Jewish garment workers and funded under the New Deal—Shahn’s mural for the Bronx Central Post Office, a fresco Shahn proposed to the post office in St. Louis, and a related one-panel easel painting titled The First Amendment located in a Queens, New York, post office. By investigating the role of Jewish identity in Shahn’s works, Linden considers the artist’s responses to important issues of the era, such as President Roosevelt’s opposition to open immigration to the United States, New York’s bustling garment industry and its labor unions, ideological concerns about freedom and liberty that had significant meaning to Jews, and the encroachment of censorship into American art. Linden shows that throughout his public murals, Shahn literally painted Jews into the American scene with his subjects, themes, and compositions.”

Here at the Living New Deal, we showcase the era’s commitment to pluralist democracy, past, present, and future. In what is the first monograph of any artist’s New Deal-era output, Diana Linden makes a case for the role of the arts and imagination in this all-important endeavor. 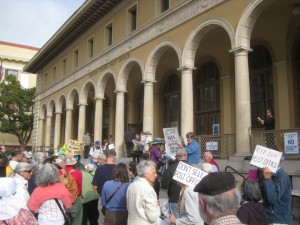 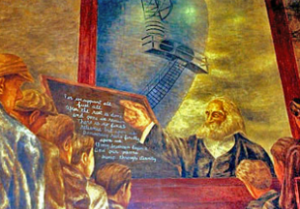