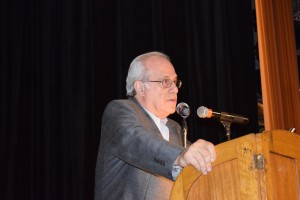 Richard Wolff speaking on the legacies of the New Deal and the crisis of contemporary capitalism. Richard A Walker, 2015

Remember when “Socialism” wasn’t a dirty word? In fact, it used to be “an American tradition,” one with deep national roots and a far-flung influence. This past Thursday, October 29, Richard Wolff reminded us that Socialism, and all the other Left “isms,” aren’t synonymous with “un-Americanism” or “terrorism.” They are, in fact, part of an American legacy of activism and agitation that are as relevant today as they were during the Great Depression. Indeed, we might take stock of a global Left politics as a worthy challenger to late Capitalism, currently in a state of crisis the world over.

Wolff, Economist and founder of Democracy at Work, delivered a talk entitled, “Another New Deal?: Answers to Capitalism’s Crisis Today.” Speaking to some two hundred cheering supporters, he held up the New Deal as the model for a time when the President of the United States listened to the country’s working people and did the best he could to please both Labor and Capital, avoiding revolution on the one hand and starvation on the other. But Wolff pulled no punches: Franklin Roosevelt’s conciliatory gesture wasn’t shy of its problems, and perhaps set the stage for monied interests to reclaim their wealth and power after World War Two. (This, Wolff noted, is a grand tradition in American socio-economic life.) Nevertheless, the New Deal pointed up a belief that “the people” are more important than the bottom line.

So: What would a new New Deal look like? Here at the Living New Deal we’ve been trying to figure that out. However it looks, as Richard Wolff suggested, a government’s commitment to economic equality and workers’ rights should be as permanent as the infrastructural and monumental sites it constructs. And it’s up to the person on the street, not her representative in Washington, to push for a permanent inclusion in American economic development.

One comment on “Speaking Openly About the Crisis of Capitalism: A Report On Our Fall Benefit”