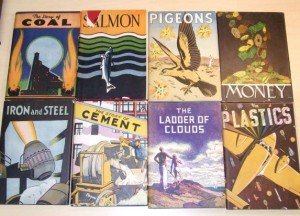 Less well known is a series of books with titles like The Romance of Rubber and Life in an Ant Hill. These texts haven’t been enshrined in our cultural canon. But during the Depression, the Pennsylvania Writers’ Project, an arm of the FWP, employed “writers, editors, and consultants” to produce The Children’s Science Series, forty-odd books dedicated to science and nature, published by Albert Whitman & Company, which has been putting out children’s books since 1919. The publishing house reminds us of these now-forgotten cultural gems, each with a striking cover. More than just antiquarian pleasures, they speak to the ways in which the New Deal put people back to work and strove to foster a healthy, informed citizenry in the coming generation.