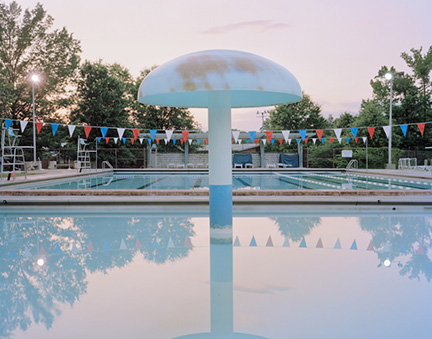 The New Deal funded affordable housing in both rural and urban areas to resettle people displaced during the Great Depression. Over the last several years, photographer and artist Jason Reblando traveled to the three New Deal “Greenbelt Towns” — Greenbelt, Maryland; Greenhills, Ohio; and Greendale, Wisconsin — built by the federal Resettlement Administration in the mid-1930s. What he found and photographed was eye opening—walkable communities set amidst parks, trees, and schools, as well as residents who are still proud of their tie to the New Deal.

The towns were planned communities that embodied the hope that American citizens would meet the challenges of the Great Depression in a spirit of cooperation. Everything about the towns, from intersecting walkways to housing layout to the surrounding belt of parks and forestland, was carefully designed so that residents would interact with nature and each other. Jason said, “The residents I met on my trips were incredibly proud of their common origin and tie to FDR. In many ways the cooperative spirit of the New Deal is alive and well in these towns.”

Jason is donating the proceeds from his limited edition photograph, “Mushroom,” to The Living New Deal.  The print, a public pool in Greenbelt, Maryland, is from a series entitled “New Deal Utopias,” Jason’s long-term photo project on the New Deal Greenbelt towns. Twenty 8.5 x 11-sized prints are offered at $50 each. Sale of all twenty would bring $1000 to the Living New Deal.

“I hope that these prints will find a new home with people who would like to support your organization’s efforts,” says Jason.

Go to Collect.give to see Jason’s and others’ photography and their chosen charities.