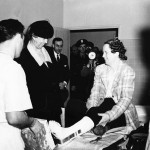 Thanks to Lincoln Cushing at the Kaiser-Permanente archives, we discovered that FDR and Eleanor Roosevelt both visited the Kaiser shipyards on the Columbia River in Vancouver, Washington during the Second World War.  Kaiser’s shipyards cranked out merchant ships to support the war effort at an unprecedented rate, using mass production techniques, and his wartime industries employed upwards of 250,000 people as a whole.  Henry Kaiser was one of the largest and most innovative industrialists of his era, and one of the few who supported FDR and the New Deal.  For the stories of Franklin ‘stealth’ visit and Eleanor’s very public one, which included the northern hospital or the revolutionary Kaiser-Permanente health system, then in its infancy, see the KP history website here and here.