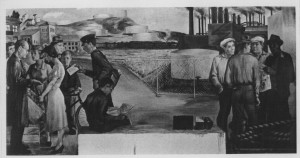 Last year, Melinda McCrary, Director of the Richmond (CA) Museum of History, heard tell of a legendary, seemingly lost mural. Richmond: The Industrial City, was painted in 1941 by Victor Arnautoff, displayed in the city’s main post office until 1976, and then packed away… somewhere. A series of calls led to Earic Bonahon, the post office janitor, “poking around the basement,” where he discovered the mural, packed away in a crate. Recently, Mike Aldax chronicled this saga, and the effort to bring the mural to the public once again, for the Richmond Standard.

Funded by the Works Progress Administration (WPA), Arnautoff—a Stanford Art Professor and former student of Diego Rivera, perhaps best known for his Coit Tower mural, City Life—painted Richmond before its transformation into the West Coast center for battleship construction during World War Two. As the mural’s title suggests, his isn’t a bucolic vision of prewar Richmond. But it’s certainly a different one, predating Rosie the Riveter and the city’s massive wartime population boom and demographic shifts. In Richmond, the refinery towers belch smoke in the background, the harbor is free of ships, and Richmonders mill around—reading the news, talking, receiving the mail.

Richmond: The Industrial City is now at the Richmond Museum of History, where it is undergoing a delicate restoration process. The museum hopes to display the mural by the end of 2015.