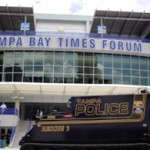 Carl Gibson nails the contradiction in Republican Party thinking between the convention slogan, “We Built It”, and the convention site, the Tampa Bay Times Forum. The slogan emphasizes private enterprise as the creator of all good things (rather than bad old government), but the Tampa Forum was built with $62 million in public funds, 3/5ths of the total cost.

Apparently, the old slogan of ‘public-private partnerships’, under which most convention centers and sports arenas have been built around the country, is not free enterprise enough for today’s GOP.

For the full article, go to the Reader Supported News site.