In the corner of a 100-square-foot mural painted on a wall of Coit Tower, Ruth Gottstein is forever memorialized.

Just 12 years old in the painting, she has a short, pageboy haircut, and soft, thoughtful eyes. She’s clutching a notebook, and wearing a blue skirt and a sailor-style blouse.

“I never wore a blouse like that,” said Gottstein, now 89. “I don’t know what my father was thinking.” 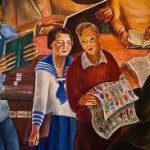 Gottstein’s father, Bernard Zakheim, was one of 26 artists who painted the 27 Great Depression-era murals inside Coit Tower. Zakheim’s mural, called “Library,” features men and women reading books and newspapers, many of them blasting headlines about union strife and public discord from the times.

On Sunday, Gottstein spoke before a crowd of 75 people about her memories of watching her father and the other artists at work in 1934, when the murals were painted with money from the federal Public Works of Art Project. Zakheim earned $619 for his mural, which took almost four months to paint.