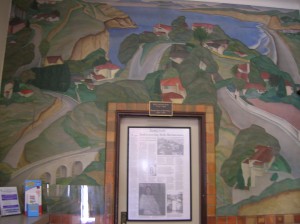 Thousands of post offices stand to be converted to condos, restaurants, and real estate offices, or demolished to cover the Postal Service’s largely manufactured deficit. Those that rely on the post office are protesting the disappearance of this still-vital public service, but few have registered what this fire sale represents to the nation’s architectural and artistic legacy.

As the Great Depression deepened, a desperate Herbert Hoover began to build post offices in an effort to buoy the economy and save his presidency. His efforts were too little, too late. The Roosevelt Administration launched a far more ambitious campaign as part of its massive public works program, building more than 1,100 post offices nationwide.

As physical representatives of the federal government, these buildings often featured dignified architecture, superb materials, and public art. Artists hired by New Deal agencies embellished public buildings with murals and sculpture. For the first time, ordinary Americans saw themselves reflected and ennobled on the walls of the public spaces where they came together to transact business.

Post office art often depicts local legends, landscapes, and historical events, but also farmers, miners, loggers, cowboys, fishermen, and foundry men — and postal workers — thus imbuing their labor with the everyday dignity that Aaron Copland expressed in his Fanfare for the Common Man, and artists such as Walker Evans and Dorothea Lange captured in the documentary photographs commissioned by the Farm Securities Administration.

Around the country post offices are on the block. In California, alone, post offices in LaJolla, Santa Monica, San Rafael, Palo Alto, Redlands, and Fullerton will soon be sold. Murals by artists such as Ben Shahn might fetch as much as the buildings they grace.

The Postal Service is obligated to safeguard such public artwork but there is no guarantee that it will.

2 comments on “Public Art at Risk as Postal Service Downsizes”