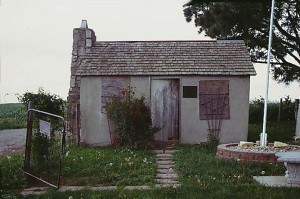 In 1855, the family of William and Rebecca Young were among the early pioneers to arrive in Nebraska following the passage of the Kansas-Nebraska Act of 1854, which opened the territory for settlement. A year later, William Young built a cabin as his family dwelling. Tragedy soon struck the family with the death of their infant Joseph, who was buried on the highest point of land on their homestead. The Youngs allowed other settlers to inter their loved ones at this location, which came to be known as the Young Cemetery. In 1888, the Young Cemetery Association formally organized to care for the burial ground. Their desire for a “shelter house” at the cemetery for funerals is evident in Young Cemetery Association papers in early 1940.
The person most responsible for enlisting National Youth Administration (NYA) involvement in the project of moving the Young family cabin to the cemetery appears to be Mrs. Clara White, granddaughter of William Young and member of the Young Cemetery Association. A letter addressed to her dated 23 October 1940 from the National Youth Administration Office in Nebraska City states, “… we are prepared to take immediate action in establishing this project and I believe as soon as we iron out the details it will be possible to begin work very shortly.” By January 1941, “Notice to Report For Work” announcements were sent to the National Youth Administration “boys,” all between the ages of 17 and 25, who were to be engaged in the project. Albert A. Young, brother of Clara White, served as project foreman. Seven NYA young men and Mr. Young worked intermittently from January to March 1941 first disassembling the Young family dwelling and then using its materials in the construction of the cabin on a concrete slab by the cemetery. For their work, the NYA youth were paid 25-cents an hour for no more than 64 hours of work a month. Following its construction at the cemetery, the cabin was opened to the public and contained a rocking chair, table, Bible and visitor registry book.
The public dedication of the Young Cemetery Cabin occurred on 25 May 1941 and drew a large crowd. It featured an invocation by Reverend Neil Stewart of the Murray Presbyterian Church and a reading of the list of servicemen interred in the cemetery, which included six Civil War veterans. Judge A. H. Duxbury gave a memorial address honoring their valor and additional speeches were delivered by Gladys Shamp of the Nebraska National Youth Administration citing the importance of its activities in the state and W. A. Robertson who paid tribute to Nebraska’s pioneers.