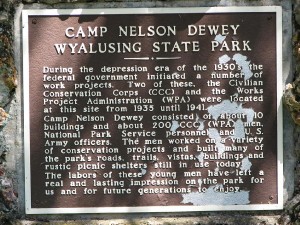 Both the WPA and the CCC worked extensively in this park.

In June of 1935, the men of CCC company 2672 set up tent barracks in what is now, the Outdoor Group Camp. The five tent barracks were home to 200 men. The tent barracks were soon replaced with wooden structures made up of barracks, officers quarters, mess hall, latrine, infirmary, recreation hall, and supply depot.

The CCC developed and improved roads, trails, and to some extent, the buildings that can be seen today at Wyalusing State Park.

They improved all of the roads that existed at the time: the road was extended from the Old Park Office to Signal Point Lookout, The road going to the Procession of Indian Mounds, and long Valley Road to the boat Landing. One other road was built no longer available is the road from Long Valley Road to Homestead Picnic Area.

They constructed trails out of four existing wagon roads in the park. The wagon road that once used by farmers traveling to Walnut Eddy on the Wisconsin River to the park is now called Old Wagon Road Trail. Old Immigrant Trail is no longer part of the existing trail system. The southern part of Sugar Maple Nature Trail was a private road leading from a farm homestead to the boat landing was converted into a trail. The CCC formed part of Walnut Springs Trail from an old military road leading to a fort in Prairie du Chien.

Finally the CCC crew members restored two Native American foot trails that are no longer part of the Trail System."

Text from plaque at the nature center:

HARVARD A. PETERSON SHELTER
Harv built several shelters and buildings in Wyalusing State Park under the CCC and WPA programs. This shelter was completed in 1938. He joined the Conservation Department at Wyalusing in 1946 and served as Park Superintendent from 1958 until he retired in 1978.