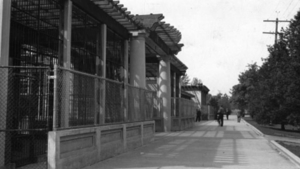 The Civil Works Administration (CWA) and the Works Progress Administration (WPA) provided funding and labor for numerous improvement projects at Seattle’s Woodland Park Zoo during the New Deal period. The initial projects were completed in 1933. In the following years, dozens of additional projects resulted in significant upgrades to the zoo’s infrastructure and animal quarters. Work on the zoo continued until late 1941, when the United States entered World War II.

The first New Deal projects at the zoo were completed through the CWA in 1933 and 1934. These included the construction of new sewers, walkways, and fences in various parts of the zoo, as well as a new, five-acre “model farm” in the northeastern section of the zoo. The model farm featured a main farm building, a separate pony shelter, and several adjacent corrals surrounded by split-rail fencing. CWA workers also constructed a cedar-log archway at the farm entrance. All of the farm structures were constructed from cedar trees found within the park.

After the CWA was dissolved in 1934, improvement work at the zoo continued with the help of funding and labor from the Works Progress Administration. The first WPA projects at the zoo were completed in 1935. In that year, workers installed chain-link fencing around the zoo’s pony ring and railings in front of the monkey cages, added concrete partitions to the tiger and bear enclosures, and repainted the interior of the tiger house. They also replaced a ventilator in the zoo hospital, installed new doors on the elephant house, and upgraded the hot water heating system in the reptile house. During the following year, WPA workers repainted 17 zoo buildings, painted 800 animal signs, and began work on concrete curbs and chain-link fencing in front of the bear and lion enclosures. Work on the bear and lion fences was completed in 1937, along with new walkways around the beaver pools and a new mural in the primate house.

The pace of WPA activity at the zoo appears to have increased during 1938 and 1939, resulting in the completion of many additional projects. Among the most significant of these were the construction of a new goat and sheep shelter, the reconstruction of the beaver pools, the construction of a new squirrel shelter, and extensive renovation work on the polar bear enclosure, mammal houses, and reptile house. New water and drainage systems were also installed for the goat and sheep shelter, the mammal houses, the lion house, and the area near the streetcar entrance on Phinney Avenue. WPA workers constructed new cobblestone walkways around the model farm and near the mammal houses, applied preservative oil coatings to several zoo structures including the newly built model farm buildings, fertilized and seeded the goat and sheep pasture, repaired the foundation of the primate building, reshingled the bison shelter, and added a concrete pier and circle to the elephant yard. They also built an addition to the commissary for truck storage, constructed more than 30 rustic guideposts for zoo visitors, and installed an old Civilian Conservation Corps building from Carkeek Park, located in the northern part of the city, for use as a small infirmary near the polar bear enclosure.

The busy pace of work at the zoo continued into 1940. During that year, WPA workers constructed an island and moat area for the monkey exhibit, started work on a simulated mountain area for the goat enclosure, remodeled the primate cages, and installed new walkways in front of the pheasantry and between the zoo and Phinney Avenue. Other projects that year included the installation of new floors in the elephant house and the buffalo and elk shelters, repairs to the pony ring fence, the installation of a new ceiling in the camel house, and the construction of a new sewer system on the north side of the primate house.

In comparison to the two previous years, the zoo saw much less WPA activity in 1941, although a few small projects were completed that year. The most noteworthy of these were the construction of several new concrete walkways in the western section of the zoo and the installation of a new sewer line between the mammal houses and the model farm area. All WPA activities at the zoo were officially suspended on 16 December 1941, shortly after the United States entered World War II. According to Park Board reports, those employed on WPA projects at the zoo were transferred at that time to defense-related jobs elsewhere in the city. 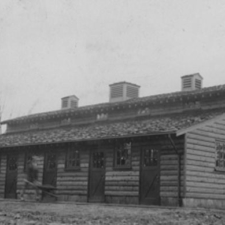 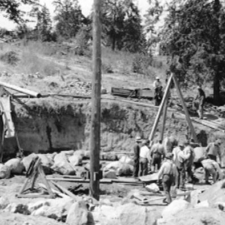