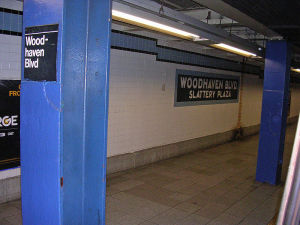 The Queens Branch of New York City’s Independent Subway (IND) was extended during the 1930s with the aid of federal Public Works Administration (PWA) funds. On December 31, 1936, eight new IND subway stations opened in Queens, extending the subway from its 1933 Roosevelt Avenue terminus in Jackson Heights to Kew Gardens. The Woodhaven Boulevard / Slattery Plaza station was one of the eight to open at this time.