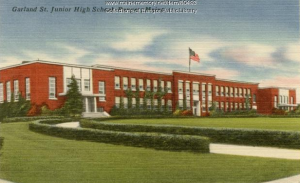 “Two new junior high schools in Bangor were built and equipped at the cost of $740,000. Every cent of this was paid by the W.P.A. (Works Projects Administration) City Manager Wallace designed the two school grounds.”

Original name was the Garland Street Jr. High School. Name changed in 1997 to the William S. Cohen School, named after former Secretary of Defense William Cohen who was born and grew up in Bangor . It is located at 304 Garland Street in Bangor Maine.

“The Cohen school and its sister school, the James F. Doughty School were both built with funds from the Works Projects Administration in 1939-1940 and were opened in September of 1940.

As of 2013, the Cohen school is now a 6th, 7th, and 8th grade middle school. There have, of course, been numerous interior renovations and additions to the Cohen school over the years, one of which was a new gymnasium added in the 1990’s.”