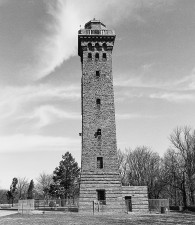 The PWA completed this stone fire observation tower atop Mt. Penn, overlooking Reading, PA and the surrounding area, in 1939. From the Literary and Cultural Heritage Map of Pennsylvania interactive website:

“When President Franklin D. Roosevelt’s New Deal created the Public Works Administration in the mid 1930s, Reading had found a way to create jobs. On September 15, 1938, the city received $15,091 in Federal grant money for the tower. This amount was combined with the city’s $18,445 and in the wintry months that followed construction began.

G.C. Freeman designed the tower, incorporating cosmetic and functional elements from over a half-dozen towers scattered throughout the county as far away as St. Paul, Minnesota. Initial design elements were obvious; the tower would be constructed of entirely fireproof materials. Stone would supply the base for which a brick tower could be built. Scaling the inside is a 120 step steel stairway. At the top lay a glass-walled room containing 16 spotlights to illuminate the land it watched over, surrounded by a steel observation deck. Capping the tower was a large, round copper dome. In August 1939, the 120-foot tower, standing 1,239 feet above sea level was completed.”