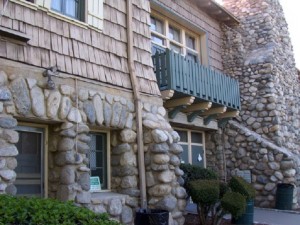 “Los Angeles County purchased 15 acres on the property east of Lake Boulevard, between Concha and Mount Curve, in 1921. It was first used as a nursery for trees and vegetation, eventually producing more than one million trees for mountain and watershed area rehabilitation.

In the 1930s, General Charles S. Farnsworth, a retired war veteran and local resident for whom the park was later named, encouraged and supported the use of the property as a park. In 1931, another distinguished Altadena resident, William D. Davies, organized a board to construct and manage the proposed community building. There were 23 local organizations represented on this Board of Control. A board member, Mrs. Thurber, went to Washington, D.C. to lobby for government funds for the building. The federal government furnished labor using local unemployed, providing jobs and hope for Altadena residents. The beautiful, two-story, stone community building was completed in 1934 by the Public Works Administration (PWA) and from its perch high in the foothills, visitors can see downtown Los Angeles and the Pacific Ocean and the rest of the park was completed in 1938 through the Works Progress Administration (WPA). The design of the Davies Building reveals the influence of the naturalistic trend of the California arts and crafts period and the handmade, careful construction of local artisans. Furnishings and equipment were funded by the Altadena Women’s Circle, Altadena Women’s Club and several interested individuals. The building still contains the exquisite, handmade wrought-iron light fixtures and fire screens they provided.

In 1939, the park was named after Charles S. Farnsworth and in 1943, the community building was named the William D. Davies Memorial Building. In 1957, the Los Angeles County Department of Parks and Recreation took over the operation of the Davies Building.”