Among several school projects proposed for Clackamas County in 1935, the Willamette Grade School project moved ahead to construction with approval of a grant from the Public Works Administration (PWA). The federal contribution was approximately $30,000. The school opened in September 1936 and served the Willamette neighborhood of West Linn until destroyed by fire in 1949.

The New Deal era school consisted of eight classrooms, a cafeteria, kitchen, and playroom. The collegiate-Gothic style building was red brick building with stone trim.  Portland-area contractor W. A. Hunt directed construction of the building. The local newspaper the Oregonian reported that eighteen men were put to work on the project.

After its destruction in 1949, Willamette Primary School was rebuilt on the same site only to experience a second fire in 1966. The current structure has undergone significant renovation over the years and does not resemble the PWA-funded school except for its use of red brick. 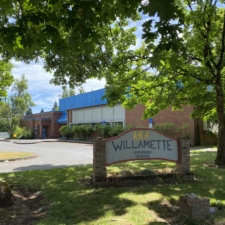