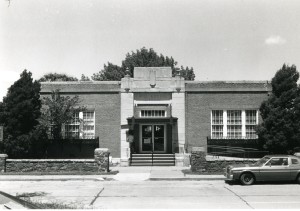 This is a one-story tan brick building with 6-over-6 double hung windows. The main entrance has four concrete steps leading to double doors, under a flat metal awning. Above the awning is a divided transom. The entrance has a large concrete block surround with a raised pediment. On the surround is engraved “Will Rogers Library”.

The building is located within Gazebo Park, also constructed by the WPA. A low stone wall surrounds this park and building.

On the left front corner of the building are two granite blocks reading: “W.S. Key, Administrator / Morton R. Harrison, Director” and “Works Progress Administration Project 1-403 1936”. There is also a two-sided cornerstone showing the Masonic information, and “Will Rogers 1879-1935 This library made possible by his generosity”.

In 2011, the Rogers County Historical Society opened the Claremore Museum of History and memorial to author Lynn Riggs. This is a museum filled with artifacts and information about the founding and history of the town of Claremore.

This building is listed in the Oklahoma Landmarks Inventory Database

The More Claremore blog entry fills in some information on the site selection process:

The name on the old Will Rogers Library, located in Gazebo Park on Will Rogers Boulevard (121 N. Weenonah), has special meaning to the citizens of Claremore. Before the death of Will Rogers, the federal government searched for a federal building site and chose the location of an old livery and garage located in the downtown area once owned by Will’s father, Clem Rogers. Will agreed to sell the site with the understanding that the money would be used for some public improvement. The site sold for $3,500. He approved the suggestion that it would be used for a library, but objected to the building being named for him. After his death, members of his family agreed the library should bear the name of Will Rogers.

The library, constructed through the W. P. A. project and the $3,500 from the livery sale, was completed and dedicated in 1936. The federal government added $11,600 to the funds available. The cornerstone of the old livery stable was placed on the outside of the library as a reminder of Will’s generosity.