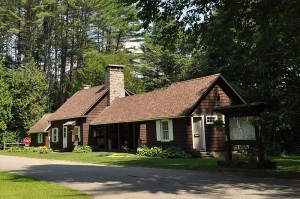 Vermont.gov:
“The land of Wilgus State Park was given to the State of Vermont in 1933 by Colonel and Mrs. William Wilgus for the creation of Wilgus State Park. The original park, constructed by the Civilian Conservation Corps (CCCs), consisted of a picnic area with large flue-type stone fireplaces and picnic tables, and the ranger’s quarters.”

“CCC crews from Mt. Ascutney State Park constructed the park between 1933 and 1935. Park structures and features built by the CCC that contribute to the historical significance of the park include the stone ranger’s quarters, 7 stone water fountains, 12 stone fireplaces, and the hiking trail to the pinnacle. Wilgus State Park was included in the National Register of Historic Places in 2002 due to its CCC heritage.”