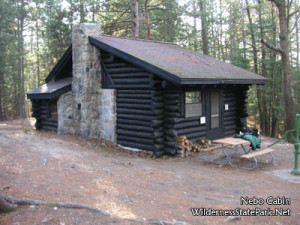 “Several of the campground buildings and cabins hold important historic and educational value. The bunkhouse and dining hall area still reflects the architectural signature of its builders, the Civilian Conservation Corps (CCC) and the Works Progress Administration (WPA). Likewise, the three CCC‐built cabins, remotely nestled in the woods, retain the historical aesthetics of the era in which they were constructed.

…in 1933, Civilian Conservation Corps (CCC) established a camp on the hill where the present outdoor center stands. Approximately 16 structures were erected. Additionally, the CCC was responsible for the construction of over eight miles of trails, installation of a public campground and the creation of the four acre pond, Goose Pond. The CCC camp was active until June, 1936. In 1937, Cap’s Cabin, a trail cabin, was destroyed in a fire shortly after being constructed.

From 1937 thru 1946, the Works Progress Administration (WPA) began working within the park. Despite original plans for the development of many buildings, the WPA completed several park projects: constructed 3 log dormitories at the outdoor center; developed the 15 acres of land previously cleared by the CCC into a campground, and; constructed a stone and log toilet building.