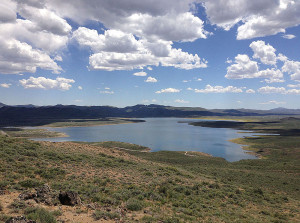 The Wild Horse Dam and Reservoir was originally constructed in 1937 by a New Deal agency, believed by Living New Deal to be the CCC.

“The reservoir was initially created in 1937 by the construction of Wild Horse Dam. In 1969, a new concrete single-angle arch dam was constructed by the United States Bureau of Reclamation for the Bureau of Indian Affairs… The original 1937 dam was left in place and is still partly visible. The newer dam doubled the size of the reservoir.”