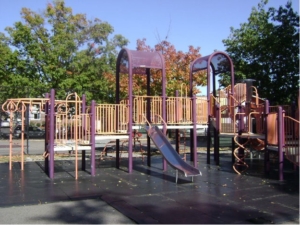 The Works Progress Administration (WPA) built the Whitestone Playground in New York. The playground was dedicated in April 1940.

The construction of Whitestone Playground was one of many recreation projects pursued by the WPA in New York. “Two thirds of this new twenty-one acre playground was formerly property of the Department of Water Supply, Gas and Electricity, and was known as the Whitestone Pumping Station…Here recreation facilities have been provided for all age groups.”

Whitestone Playground, “designed by the Park Department and Built by the Works Progress Administration,” contributed to “a total of 323 new or reconstructed playgrounds completed by the New York Park Department since January 1, 1934. At that time there were 119 playgrounds in the five boroughs and at present there are 403.”