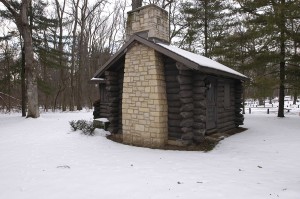 White Pines State Park on Ogle County, Illinois, contains several CCC structures: “In 1933, with the Great Depression in full swing, the Civilian Conservation Corps (CCC) sought to relieve the work needs of unemployed Americans. The National Park Service sought to work with state governments in an effort to meet those ends. Many of the projects the CCC was involved with were construction projects. The project at White Pines was originally meant to be the construction of a lodge building. From 1933 to 1939, two hundred men, many of them World War I veterans, worked on the State Park construction project.[4]

After the lodge was completed, it was decided to build a restaurant and breezeway onto the lodge building.[4] Logs for most of the project were shipped via railroad from as far away as Oregon and Washington state, unloaded in Stratford, Illinois and dragged to the construction site by teams of horses. The CCC project also completed sixteen[6] one-room log cabins and three four-bedroom cabins. The work crews also built picnic shelters, trail shelters, and foot bridges. Only the logs for the cabins came from another source.[4] They were purchased from a salvage company that had purchased utility poles from a defunct utility company at the price of 30 cents a piece.”   (wikipedia)