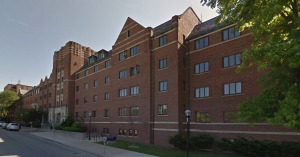 The University of Michigan’s West Quadrangle was constructed during the Great Depression with the aid of federal Public Works Administration (PWA) funds.

“[A] proposal including a grant from the Federal Emergency Administration of Public Works of the federal government was acted on by the Regents by mail vote in July, 1938. The proposal contemplated the completion of the residence hall development of which Allen-Rumsey House was the first unit and the construction of another residence hall to accommodate medical students. This expansion was made possible by an outright grant of 45 per cent of the project cost by the federal government. The remaining 55 per cent of the cost was to be borne by the University through the sale of bonds. A resolution authorizing the application to the Public Works Administration was approved in July, 1938, and in August the Regents accepted the Public Works Administration grant amounting to $945,000. At the same time they authorized the sale of bonds in the amount of $1,477,000 to finance the University’s share of the project. Included in this bond issue was $177,000 to cover the refunding of the outstanding bonds on Allen-Rumsey House.” (umich.edu)