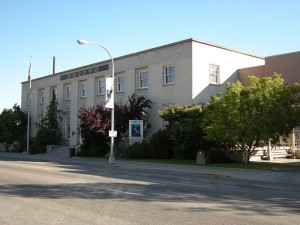 This US Treasury building replaced the old building in 1938. Both buildings are now part of the Wenatchee Valley Museum.

“As a Depression era public works project, the proposal for replacing the old Federal building drew considerable attention from the local press. In 1933, after three years and in the middle of a series of more than 30 first and second page news articles on the subject, headlines reported ‘Hope glimmers for post office building here.’

“Plans for the new building were not finalized until late in 1936. Congressman Sam B. Hill secured an appropriation of $305,000 which was estimated as the cost of construction for the new Post Office and including the desired alterations to the old one. Plans and specifications required 175 single spaced pages of legal size paper and twenty-eight 30 by 42 inch blueprints.

“The contract was let to Consolidated Engineering and Construction Company (E. G. Anderson, contractor). Clement J. Gerber, Federal Engineer supervised work  on the job site representing the procurement division of the U.S. Treasury Department. Construction began in March, 1937 and the project was completed in 11 months.

“In addition to functioning as a postal facility both buildings have housed Federal offices for other agencies such as the Civil Service Commission, Farmers’ Home Administration, Soil Conservation Service, Department of Agriculture – Agricultural Research Service, and the Federal Bureau of Investigation.”