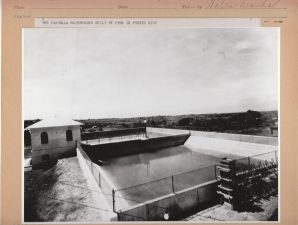 Municipalities across Puerto Rico asked for the PRRA’s help with improving existing water systems and building new ones. The municipality of Isabela benefited from this help—between 1937 and 1938, the PRRA improved and built waterworks and irrigation systems in the community. Geoff Burrows writes that, “From Adjuntas to Utuado, the PRRA repaired, modernized, and constructed drinking water systems, sewer systems, and storm drains across the island. By 1938, the PRRA had: repaired 15 municipal waterworks; built new water systems and filter plants in Comerio, Isabela, Patillas, and San Lorenzo; built eight water systems for rural housing and eight for vocational schools; and one new health sewer including concrete curb and gutters in Mayagüez.”

The 1938 Annual Report of the Department of the Interior describes the funding disbursed for the operation of the irrigations system in Isabela, as well as the revenues generated by the project. “Isabella Irrigation Service: The amount collected from sales of electric energy, sales of water, assessments of water taxes and small miscellaneous revenues was $147,141.02. Sales of water amounted to $20,555.86, which compares satisfactorily with sales in the previous year. Sales of electric energy amounted to $116,166.27, an increase of $9,841.15 over last year. The amount disbursed for operation of the entire project was $110,636.31.”

The exact location and status of this facility are unknown to Living New Deal.

Project originally submitted by Brent McKee on May 2, 2017.