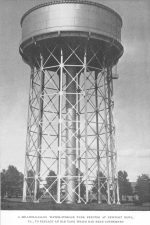 Photo from "America builds: The record of PWA," a report prepared for publication, the Public Works Administration on July 1, 1939, page 168.

In 1934 the Federal Public Works Administration (PWA) provided funds to build a million-gallon water storage tank in Newport News, Virginia to replace the old water tank. The caption for the photo above reads “A million-gallon water-storage tank erected at Newport News, Virginia, to replace an old tank which had been condemned.” The name listed for the project on the PWA docket records is “Newport News 60th Street Elevated Tank.”

Researcher Frank da Cruz has found that this water tank as well as others constructed by the PWA in the area at the same time, were “…financed by 25% to 45% federal grants and 4%, 25 year, serial, revenue bonds accepted by the Public Works Administration.”

This 60th Street Elevated Tank still exists and is in use.

The construction of the water tank was part of a large scale waterworks expansion project that was carried out with the support of New Deal programs.The Newport News Water Resources Coordinator reports that “[o]ur system was expanded considerably in the 1930s and 1940s through PWA- and FWA-funded projects. These included a significant number of water mains; a dam, intake, and pumping station on the Chickahominy River; employee housing, and two 6-MGD [million gallon per day] water treatment plants. Unfortunately, most of these facilities are underground, have been demolished and replaced, or have been significantly overhauled/​rehabilitated, so little photographic evidence exists of the original work.”

Frank da Cruz’s webpage on this water tank details the extensive waterworks construction and improvement projects financed under the New Deal in the vicinity of Newport News, Virginia: http://kermitproject.org/newdeal/virginia/newportnews/watertower01.html 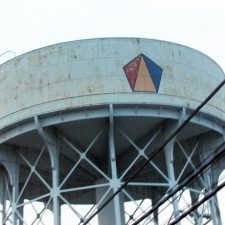