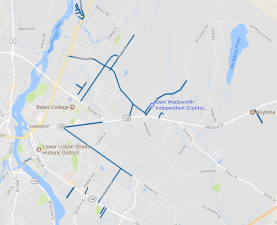 Rebuilding the water supply system was part of the massive amount of public works projects undertaken in this small industrial city.

In 1934, the Mayor reported “Please let me enumerate some of the most important projects completed during this last year under the E. R. A. All proposed projects on sewerage have been accomplished to the extent of over 5 1/2 miles and nearly as much for water lines;”