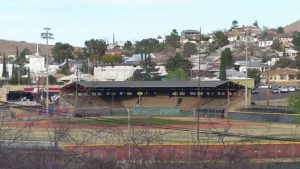 The Works Progress Administration  (WPA) built grandstands for the Warren Ballpark in Bisbee.

The stadium was built by the C&A Mining Co. in 1909. By the 1930s, the Phelps Dodge Corporation had purchased the C&A Mining Co. and had inherited the Warren Ballpark complete with old wooden grandstands that needed to be replaced. In 1936, the Bisbee Unified School District purchased the ballpark from the mining company for $10. It turned the ballpark into public property eligible for WPA improvements. The superintendent of the Bisbee Unified School District was R.E. Souers. In addition to being the superintendent, he was also the president of the Arizona-Texas Class C Minor League and the director of the relief administration and welfare for Bisbee.

In September 1936, plans for the new concrete grandstands/clubhouse were finalized by Louis H. Laging. He was hired by the Civil Works Administration in January 1934.

In December of 1936, the state WPA administrator, W.J. Jamieson, visited Warren and reviewed the plans to convert the wooden grandstands to concrete.

The ballpark was constructed during the winter and early spring of 1936-37 and the new grandstands at Warren Ballpark were dedicated on April 6, 1937, on which date the Chicago Cubs and Chicago White Sox played an exhibition game there.

As of March 2018, the ballpark grandstand is still in use.

Warren, a suburb annexed into the Bisbee city limits in 1959, was conceived by the Calumet & Arizona Mining Company in 1905 and designed in 1906 by landscape architect and city planner Warren Henry Manning based on the City Beautiful Movement. Warren would be a sanitary and modern community for families—symmetrically aligned streets, electricity, underground plumbing, churches, schools, and a large park, which ran through the middle of the development. 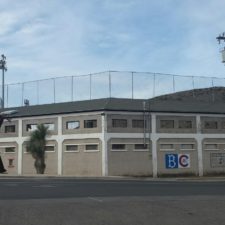 Location notes: Located at the south end of Vista Park in the Bisbee suburb of Warren.