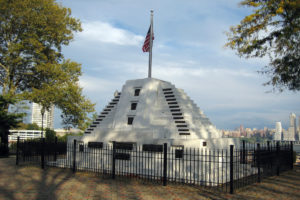 The New York Times wrote: “A triangular monument, with thirteen steps on each side representing the twenty-six residents of this place who lost their lives in the World War, was dedicated this afternoon at exercises attended by 5,000 persons.”

The $7,000 monument, which the Times reported as being on “Boulevard East near Tenth Street,” (these days, J. F. Kennedy Blvd. north of 54th Street) “was built by the township with labor provided by the WPA. According to Township Commissioner Leo Honore … 90 per cent of the laborers on the project were war veterans.”