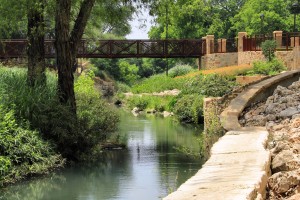 In June 1933, using a design by architect Robert H. H. Hugman, workmen from the Civilian Conservation Corps, began building walkways and bridges along Walnut Branch, a small tributary of the Guadalupe River, and lining the slopes of the waterway with curving stone retaining walls. Dams crossed by stepping stones, low falls, and quiet pools were built along the natural course of the waterway that passes along the edge of the city’s downtown.

The park eventually fell into neglect during a severe drought in the 1950s, though the main spring never dried up. Fear that mosquitoes breeding in the small ponds could possibly spread polio led to the demolition of the stepping stone dams along the waterway.

Revitalization of the area began in the 1980s. The Women’s Federated Clubs and the Seguin Garden Club created a Memorial Rose Garden. In 1995, the city formed a master plan for renovation. A bond package approved in 2006 allowed the city to buy land for the park. The City of Seguin dedicated the new Walnut Springs Park on Saturday, May 14, 2011.