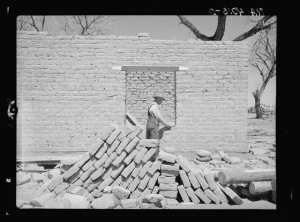 The small, rural community of Bosque Farms lies about 18 miles south of Albuquerque and was one of the New Deal resettlement communities. The community’s own website describes that history:

“…In the 1920s, Otero sold his land in small lots to individuals, but due to the depression, which began 1929, the people were unable to make the payments. Otero repossessed the land, and in 1934 sold 2,420 acres to the New Mexico Rural Rehabilitation Corporation. The resettlement area was eventually taken over by the Federal Resettlement Administration (part of President Franklin D. Roosevelt’s New Deal) in 1935 and named the Bosque Farms Project.

This project divided the Bosque Farms tract into 42 parcels of 40 to 80 acres in size. Forty-two families were chosen by a lottery in May 1935, and paid $140 per acre on forty-year mortgages. The Works Progress Administration (WPA) funded the drainage trenches, homes, and roads, thus beginning the community of Bosque Farms.

Seventy-two families came from the dust bowl areas of Taos and Harding counties to the tree covered swamps called the Bosque during 1935. Many people kept right on moving, but 42 modern pioneer families stayed to build our present Bosque Farms community. Some families lived in tents until temporary houses were built. Fourteen of the families lived together in the barn next to the old Otero ranch. The men worked in crews to build ditches to drain the swamp and to clear the land of the trees. The people drew lots for their properties. 2-3 bedroom adobe homes were built by the project for the families on their lots. The loop road was called Alameda Road, while the road dividing the loop in half and passing the school was named Esperanza Drive. The Bosque School was built at the same time…

Over the ensuing 70 years, Bosque Farms has gradually become more residential, but still maintains a connection to its rural and farming legacy.”   (http://bosquefarmsnm.gov)