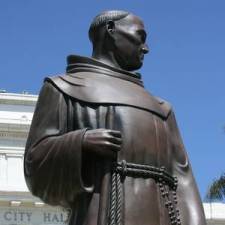 This image is of a bronze copy made by Wilbur Rubottom in 1989 to replace the original concrete statue, which was decaying.

John Palo-Kangas created this 14-foot concrete sculpture in 1937 for the Federal Art Project of the Works Progress Administration (WPA).

It stands in front of Ventura’s city hall. In 1989, Wilbur Robottom made a bronze copy that replaced the decaying concrete original.

The statue is of Junipero Serra (1713-1784) whose Mission San Buenaventura, built in 1782, was the last of nine Serra founded in California.  Serra is today a controversial figure – both sainted by the catholic church for his missionary work in New Spain and hated by many native Californians because of the treatment of indigenous peoples by the Franciscan padres who ran the Alta California missions from 1776 to 1830.