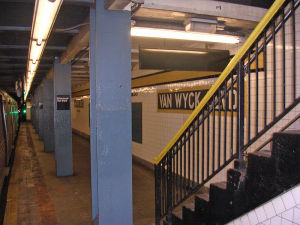 The Queens Branch of New York City’s Independent Subway was extended during the 1930s with the aid of federal Public Works Administration (PWA) funds. The first extension opened in 1936. On April 21, 1937, four more subway stations opened in Jamaica, including the Briarwood / Van Wyck Boulevard station that presently serves the E and F trains.