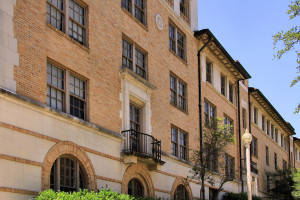 The student body of the University of Texas increased from 6,000 in 1920 to 10,000 in 1930, necessitating an extensive building program for the university. The university added Andrews Dormitory for women and Roberts Dormitory for men in 1936. The Public Works Administration provided a grant of $114,000 and a loan of $354,000 for these two buildings of which $220,000 went to build Roberts.

The university named Roberts Dormitory in honor of Oran Milo Roberts who served as Governor of Texas from 1878 to 1883. The building is of Spanish Renaissance style architecture with cream bricks and a red tile roof and originally housed 145 men.

Now called Roberts Residence Hall, it became a coed building in 1993 and currently has a capacity of 129.