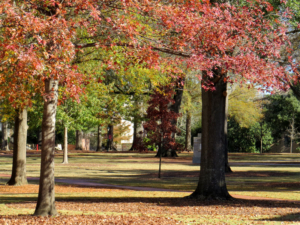 The University of South Carolina was the beneficiary of a large influx of New Deal funds from various agencies throughout the Great Depression. In “The Prosperity of the Depression,” the university’s website writes the following with regard to this era of the campus’s history:

“It is interesting to note that almost as many buildings were built during the Depression as during the period 1908-1930. A world economic crisis occurred in 1929, the harbinger of the Great Depression. Even before that, in 1927, state appropriations for permanent improvements had ended.

On the one hand, the Great Depression meant severe financial constraints for the University: President Leonard Baker reported to the trustees in 1933 that the University appropriations had been cut cumulatively by 69 percent since 1929. Faculty salaries had been slashed, tuition raised, and scholarships abolished.

In one area, however, the University benefitted greatly from the Depression: New Deal spending allowed building, renovation, and general improvements such as the paving of walkways.

In 1934 a Civil Works Administration grant paid for repairs to LeConte, Davis, Sloan, Rutledge, and DeSaussure colleges and other buildings. In 1935, New Deal funding allowed expansion to continue: the football stadium, completed in 1934 with federal funds, with the University to assume the balance of the cost; the World War Memorial, completed in 1935 and paid for by private subscription and a Public Works Administration grant; Maxcy College (1937), a portion of which was paid for by the PWA; Preston College (1939), 45 percent of which was paid for by the PWA and the rest with dormitory-revenue bonds; Sims College (1939), 45 percent of which was paid for by the PWA; and McKissick Library (1940), built at a cost of $560,000, of which the state contributed $335,000 and the Works Progress Administration paid the balance. PWA and WPA designs were very similar to those built in the 1909-30 period. Thus, fortuitously, the Horseshoe was surrounded by relatively low structures. Columns still were popular, as evidenced by McKissick Library and Preston and Sims colleges. McKissick is a prime example of the WPA Romanesque style of architecture, and is duplicated in the library at Davidson College and the spa at Saratoga, New York.”