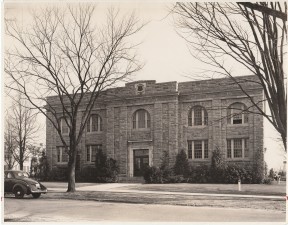 Edwards Hall contains six murals painted by Gino Conti, located in Edwards Hall, the main auditorium of the University of Rhode Island. The murals were created in 1941 under the WPA’s Federal Art Project. They were covered over with sheetrock during a renovation during the 1960s. Until that sheetrock was removed in 2010 in preparation for another renovation, they were thought to have been destroyed. Restoration of the murals was funded by the American Recovery and Reinvestment Act and re-unveiled at Edwards Hall on October 3, 2011.

The Providence Journal of March 16, 1941 stated, “Of the two largest panels, one symbolizes the drama, music and the dance; the other the protection of youth; the striving for progress and the past. Four smaller canvasses depict the elements with groups of figures symbolizing water, fire, air and workers in the soil.”