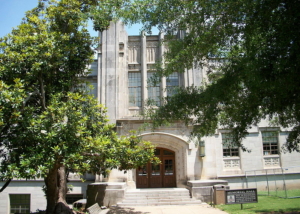 The district was added to the National Register of Historic Places (NRHP) on September 23, 2009 and the listing was announced as the featured listing in the National Park Service's weekly list of October 2, 2009.[3]

The historical core of campus was built in many phases, coincident with when funding was available to build. Beginning with the construction of Old Main in 1879, buildings were built haphazardly around campus. This was chenged when the architecture firm Jamieson & Spearl designed the 1925 master plan, which includes many of the Collegiate gothic style buildings (such as the Agriculture Building).[4] The plan allowed for more structure and a better layout. However, funding ran dry and the master plan came to a halt. Building resumed following many Public Works Administration grants after World War II…

President John C. Futrall identified a need for a student union on campus and began charging students a $2 "student union fee" on their bill. That fee, coupled with Public Works Administration funding, resulted in the construction of Memorial Hall, which at the time was named Student Union. On September 12, 1939, Futrall was killed in an automobile accident, and the Board of Trustees passed a resolution to change the name to Futrall Memorial Hall. The building was still referred to as the Student Union, despite the motion.

The grand building was opened in March 1940, and featured a bookstore, restaurant, post office, confectionery, and a large ballroom with bandshell.[24] The second floor had offices for The Arkansas Traveler (the student publication). The building remained as it was for ten years, until a large three story addition was finished to provide better food services. Upon completion of the Arkansas Union in 1973, Memorial Hall became home to the psychology department, and many of the rooms were converted to classrooms. It also gained the Landscape Architecture and Air Force ROTC departments.

The Board of Trustees again changed the name to Memorial Hall in 1973, which is how it is known today. The building still houses the three listed departments to this day.
[edit] Features

Memorial Hall's interior contains many art deco features from the period of construction, including large lights near the steps of the north enterance and lots of sleek lines. The floors feature repeating patterns typical of art deco contsruction and the staircases appear streamlined and modern. At the west enterance to the building stand two large, mature trees. One is a Bald Cypress and the other a Southern Magnolia. Both trees date to the time of Memorial Hall's construction."

View all projects at University of Arkansas - Fayetteville AR (9 Projects)