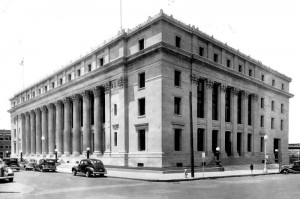 New Deal funds enabled an addition to the U.S. Post Office and Courthouse in Muskogee.

“The U.S. Post Office and Courthouse is an excellent example of the Classical Revival style. Containing five floors plus a basement, the building gives the appearance of only four stories. In 1937-1938, an addition was constructed on the back of the building, and the former storage space on the fifth floor was converted to office space. The upper four floors are organized around a lightwell with corridors ringing the lightwell on the north, east, and south sides. Office space is off the corridor away from the lightwell except on the west side of the building. During the 1938 expansion, the west corridor was moved west, away from the lightwell, to allow for the construction of additional office space immediately adjacent to the lightwell. The limestone-clad walls support a low-pitched, hipped roof covered by a single ply, white membrane over the original building and a flat, asphalt composition roof over the 1938 addition.”   (NRHP Text)

Now known as the Ed Edmondson U.S. Courthouse, the building was listed on  the National Register of Historic Places in 2000 and “serves as a government office building and federal courthouse for the United States District Court for the Eastern District of Oklahoma.”   (wikipedia.org)