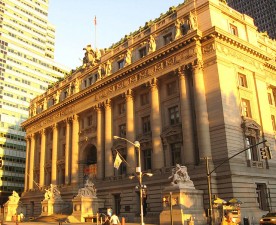 The Alexander Hamilton U.S. Custom House was constructed in 1902-1907. In the 1930s and early 1940s, federal funding was used to make several improvements to the building, including the addition of a copper apron to the dome in 1933; improvements to the elevators in 1937; and the installation of revolving doors at the Bowling Green entrance in 1941.

The building now serves as the New York branch of the National Museum of the American Indian, a part of the Smithsonian Institution in Washington, D.C.