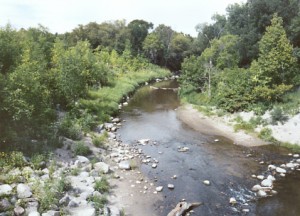 In 1935, a CCC transient work camp, SP-5, was built in Larimore. It initially housed 185 young men, along with their commanding officers. They were assigned to build a new park nearby, originally called Grand Forks State Park.

CCC construction projects in the park included bridges, roads, parking areas, foot paths and a number of stone and log buildings, many of which are still in use today. One of their notable achievements was the construction of a fieldstone dam, swimming hole and bathhouse. The bathhouse was later converted into the CCC Memorial Picnic Shelter, and the swimming hole was closed due to public safety concerns.”