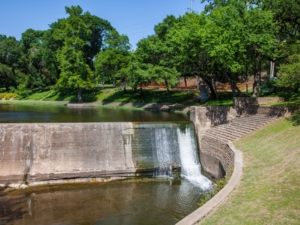 In 1939, the Works Progress Administration (WPA)began improvements at Turtle Creek Park in Dallas TX.  The project was one of many undertaken in the area by the WPA and other New Deal agencies.

“Widespread park improvements costing $34,000 have been announced at Dallas, Texas,” a writer for Parks & Recreation reported in January of 1939. “Included in the developments will be a new South Dallas community center, a golf course for Negroes and additional work in Robert E. Lee Park and also on the White Rock beautification program.”

Dallas’s Robert E. Lee Park was renamed Turtle Creek Park after a vote by the Park Board on April 4, 2019.