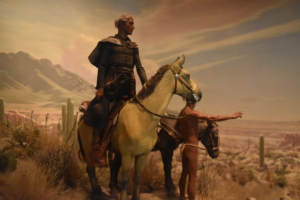 The Tumacácori National Monument was set aside by President Theodore Roosevelt in 1908 to protect the ruins of the Mission of San Jose de Tumacacori.  In 1918, it came under the administration of the National Park Service and its regional ‘custodian’, Frank Pinkley.  Congress created the Tumacácori National Historic Park in 1990, adding the ruins of two nearby missions, Los Santos Angeles de Guevavi and San Cayetano de Calabazas.

Under the park service’s guidance, Tumacácori mission church and its dependencies were stabilized in 1920-21, but intentionally not restored.  Only with the aid of the New Deal did the park come to take on its present appearance with the addition of surrounding walls, a visitors center and museum in the mission style, and a decorative garden.

The  museum was constructed in 1937 with funding from the Public Works Administration (PWA), exhibits were installed in 1938,  and the official dedication took place in April 1939.

The museum exhibits included a set of dioramas created at the Western Museum Laboratories in Berkeley, California, on and near the campus of the University of California. Funding and labor for the shops came from several New Deal agencies, including the PWA, CCC, FERA, and the Works Progress Administration (WPA). They were crafted under the direction of sculptor Bartlett Frost, who depicted himself as a kneeling soldier in one.

The dioramas are elaborate miniature portrayals of the history of Father Kino, founder of the mission at Tumacácori.   The three remaining on display show Father Kino surveying the landscape of southern Arizona, an attack on Tubutama during the Pima revolt of 1751, and Kino blessing group of native people in an outdoor shelter.

The museum has been redone twice since then, in 1972 and 2009. It is unknown to us how many dioramas were in the original exhibits or how they were arranged.  One was shipped to the mining museum in Bisbee AZ and others  have disappeared, including a large one showing a service in the interior of the mission church.

They current displays are treated in a more contemporary fashion, with less adoration of Father Kino

There is also a small equestrian statue of Father Kino in an alcove in one passageway, which came from the same Western Museum Laboratories. 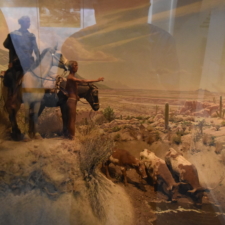 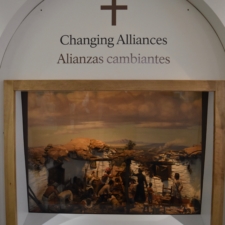 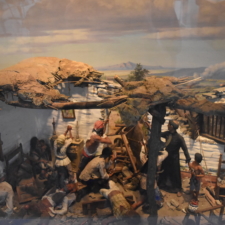 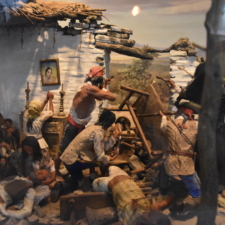 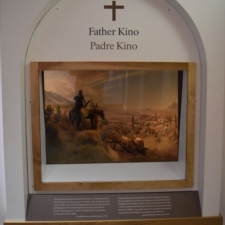 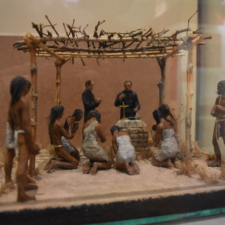