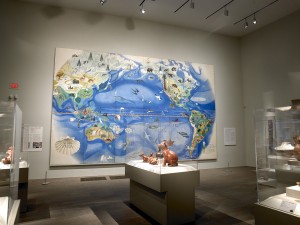 "Part of the mural set entitled Pageant of the Pacific by Miguel Covarrubias. Fresco, lacquer, masonite. On loan from the Treasure Island Development Authority... currently on display in the Art of the Americas gallery at the De Young Museum."

Miguel Covarrubias painted six murals on the theme “Pageant of the Pacific” for the Golden Gate International Exposition. They were displayed on Treasure Island along with other art objects on the theme of “Pacific Unity” from 1939-1940.

The murals have been housed in several locations since the 1940s. The Treasure Island Development Authority now looks after five of the murals, including one currently on display at the de Young museum. The other four are currently in storage. A sixth mural disappeared in the 1940s and its whereabouts are currently unknown.

Location notes: Treasure Island
A WPA allocation of several million dollars funded the reclamation of the exposition site at Yerba Buena Shoal. A PWA program included construction of an administration building, ferry slips, two airplane hangars, an airport terminal building, a ferry terminal, five large exhibition buildings and paving of the site. 45% of the approximately 4 million dollars to accomplish this program came from the PWA, and the Exposition Company contributed 55%. (The Architect and Engineer. May 1936.) More Treasure Island Archive Photos available at http://newdeal.feri.org