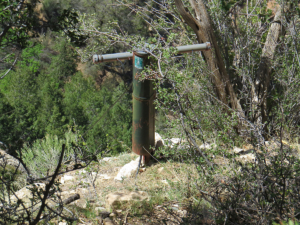 The Civilian Conservation Corps (CCC) conducted extensive development work at the Grand Canyon, 1933-42, including construction of the Transcanyon Telephone Line.

A plaque declaring the placement of the Transcanyon Telephone Line on the National Register of Historic Places can be found along the wall of Rim Trail, between Thunderbird Lodge and Kachina Lodge. Resthouses along the Bright Angel Trail feature telephones that are still connected to the line.

CCC Walking Tour: “Because communication between the North and South Rims was frequently difficult and unreliable, the CCC began construction of a telephone line across the canyon in November 1934. A group started from each side of the canyon, stringing telephone line on metal poles down steep cliffs and over narrow gullies. Not only was the terrain rugged, but also inner canyon temperatures in the summer frequently exceeded 100°F (40°C)! When completed in September 1935, the line stretched from the North Rim along the North Kaibab Trail to Cottonwood Camp and Phantom Ranch. From Phantom Ranch the line crossed the Colorado River to a spur line on the South Kaibab Trail at the Tipoff. The main line continued along the Bright Angel Trail connecting Phantom Ranch to Indian Garden, the resthouses, and the South Rim developed area. The line was used so extensively for administrative purposes and rescues that another circuit was added in 1938-39. The Transcanyon Telephone Line has been used frequently to aid hikers, mule riders, and river rafters. When completed, the line was 25 miles (40 km) long, later reduced to 18 (29 km), with a total of 592 metal poles. Although microwave transmissions, satellite phones, and radios have replaced line transmissions (cell phones do not work within the canyon), small portions of the original line are still used today.” 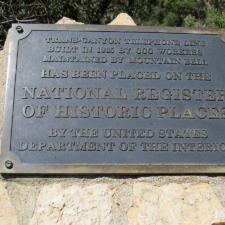 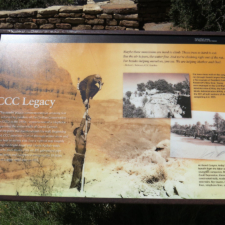