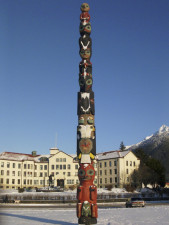 A rock retaining wall was built by the Civilian Conservation Corps (CCC) in 1940 with the creation of Totem Square. The “Baranov” Totem Pole, also completed in 1941-42 as a project of the CCC under the supervision of the Forest Service. It was restored in 2010-2011 by local totem expert Tommy Joseph, using the original design drawing by George Benson, a local Tlingit. The Totem Pole has a controversial past surrounding both the construction of pole in Wrangell rather than Sitka as originally commissioned and for the original design, which many viewed as disrespectful and unrepresentative of the region’s history.

A record at the Simon Fraser University Digital Collections summarizes the history of the Totem: “The original intent for the Totem at Sitka Pioneer Home was to commemorate the peace treaty that Alexander Andreyevich Baranov helped broker in 1805 after the battle between the Russians and the Tlingit. The pole was commissioned by the U.S. Forest Service 135 years after a pivotal battle. The pole was made at the request of local Tlingit leaders of Sitka’s Kiksadi clan as a project of the Civilian Conservation Corps (CCC). The pole was carved in Wrangell much to the disappointment of the Sitka tribes since Wrangell and the Sitka tribes had a long history of conflict.”