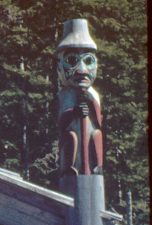 The Village Watchman Poles are part of the structure of the clan house at Totem Bight. This is one of two identical posts that mark the corners the structure, flanking the entry facade. Sitting on the corner posts, a man figure wearing a spruce root hat and a crest design on his face, holds a cane and appears ready for a dance or potlatch. This pole was carved by Charles Brown at Totem Bight for the Civilian Conservation Corps restoration program.

The photographic material published here by the Living New Deal was provided by courtesy of Linn A. Forrest (1905-1986), a practicing architect who photographed the totem poles at the time of their restoration, between 1939 and 1941. Forrest oversaw the joint program of the Forest Service and the Civilian Conservation Corps to recruit Alaska native carvers in the restoration and recarving of totem poles throughout Southeast Alaska. Employed by the U.S. Forest Service in Oregon, Forrest transferred to Juneau, Alaska in 1937, where he undertook the totem restoration as one of his first projects. Under his supervision, indigenous carvers preserved and restored 103 totem poles and three Tlingit and Haida community houses. Forrest documented the restoration process and maintained notes and a photo record of a significant portion of the work. He used a Leica camera designed for the then new Kodachrome 35mm color slide format.