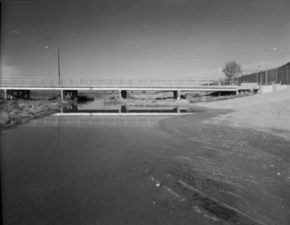 The Tornillo-Guadalupe International Bridge, known locally as the Fabens-Caseta Bridge, encouraged trade and commerce between the United States and Mexico for seventy-eight years (1938-2016), providing a symbolic and physical connection between the American and Mexican cultures. It was constructed a half mile southwest of this location in 1938 as part of the Rio Grande rectification project of the International Boundary Commission. It was demolished in 2016. This bridge, along with its sister bridge linking Fort Hancock, Texas, with El Porvenir, Chihuahua, were cornerstones of the rectification project stretching from El Paso, Texas, to Little Box Canyon south of Fort Quitman, Texas, implemented in accordance with the convention between the United States and Mexico on February 1, 1933. The Austin Bridge Company of Dallas constructed the bridge from March 14 to June 30, 1938, for $31,000. It was the last structure of the Rio Grande rectification project.

The purpose of the rectification project was to provide flood protection to urban, suburban and agricultural lands, and to stabilize the flood-prone international boundary line in the El Paso – Juárez Valley. This was accomplished by straightening the meandering Rio Grande channel and constructing flood control levees in both countries. A large-scale endeavor, the construction for the rectification project provided 3.8 million man-hours of employment in the midst of the Great Depression.

The Fabens-Caseta Bridge was a significant example of a steel I-beam bridge that embodied the distinctive characteristics of 1930s-era bridge construction.

Location notes: Located at the entrance to the Serna Port of Entry about 1/2 mile to the northeast of the old bridge is a new THC Historical Marker.