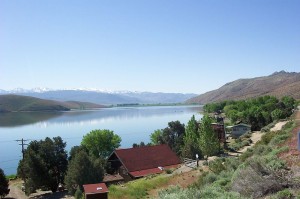 Topaz Lake, on the CA/NV border, looking south from the NV side.

“Camps Newlands and Carson River worked primarily in the Fallon and Fenley areas. While Camp Carson River concentrated on improving the spillway at Lahontan Dam, Camp Newlands took on downstream canals and ditches. Camp Newlands also provided the labor force for the Walker River Irrigation system in Smith Valley. At Topaz Lake, the CCC constructed the levee along the east bank of the intake canal, adding an additional twenty thousand acre-feet of water storage. Camps Newlands and Reno also maintained a summer camp at Boca Dam where enrollees worked on the Truckee Storage Project – a Nevada and California joint undertaking.”

Location notes: CCC enrollees constructed a levee along the east side of the intake canal.