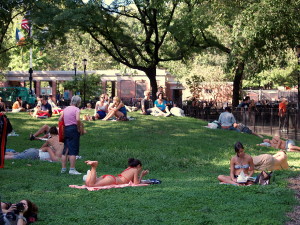 The central knoll at Tompkins Square Park in New York City where people sunbathe and relax.

This sizeable Manhattan park has served as a recreational space since the early 19th century. In the 1930s it was redesigned under Parks commissioner Robert Moses. On October 1, 1936 Parks announced that the:

“north half of the park from Ninth to Tenth Streets between Avenues A and B has been redesigned and reconstructed and includes basket ball, volley ball, shuffle board, paddle tennis and horse-shoe pitching courts; complete play apparatus and e wading pool.”

Although the press release announcing the completion of this work does not mention the WPA or other New Deal agencies, researcher Frank da Cruz explains here that almost all New York City Parks Department projects between 1934 and 1943 were carried out with New Deal funds and/or labor, and that after April 1935, the WPA quickly became the main source of this support.

“Since its beginnings in the 19th century, Tompkins Square Park has served as a place to voice dissent.  Demonstrations in 1857 and 1875 about the lack of jobs and the poor economy gave way to local residents’ protests about gentrification in the 1980s and 1990s.  In the late 1980s, police and East Village residents clashed after Parks began enforcing the park’s closing hours, in effect barring homeless from camping in the park.

The park underwent a large renovation in the 1990s. The bandshell was removed, a dog run and new playgrounds were built, several monuments conserved, and the turf and sidewalks replaced.  Today Tompkins Square Park continues to serve a diverse community, providing a peaceful, meditative environment within the bustle of city life.” 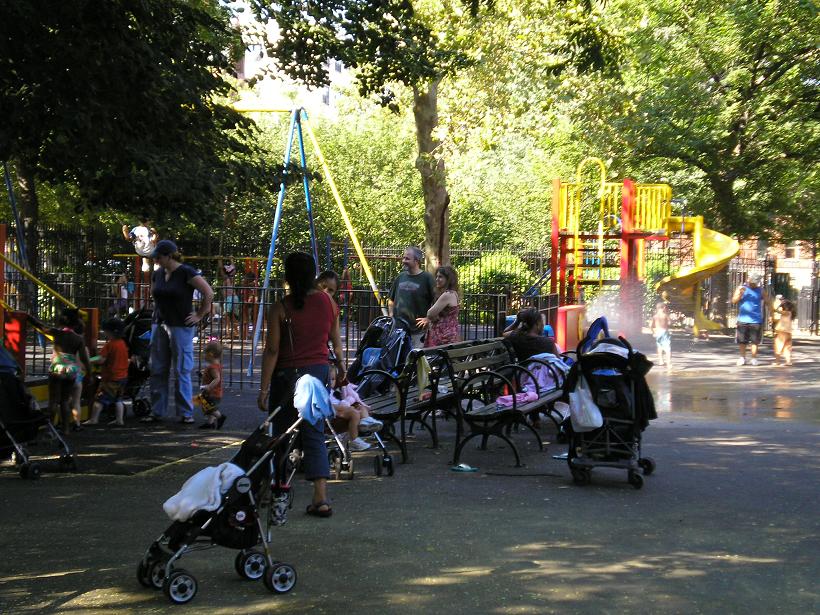